THE GODS OF METAL UNITE! 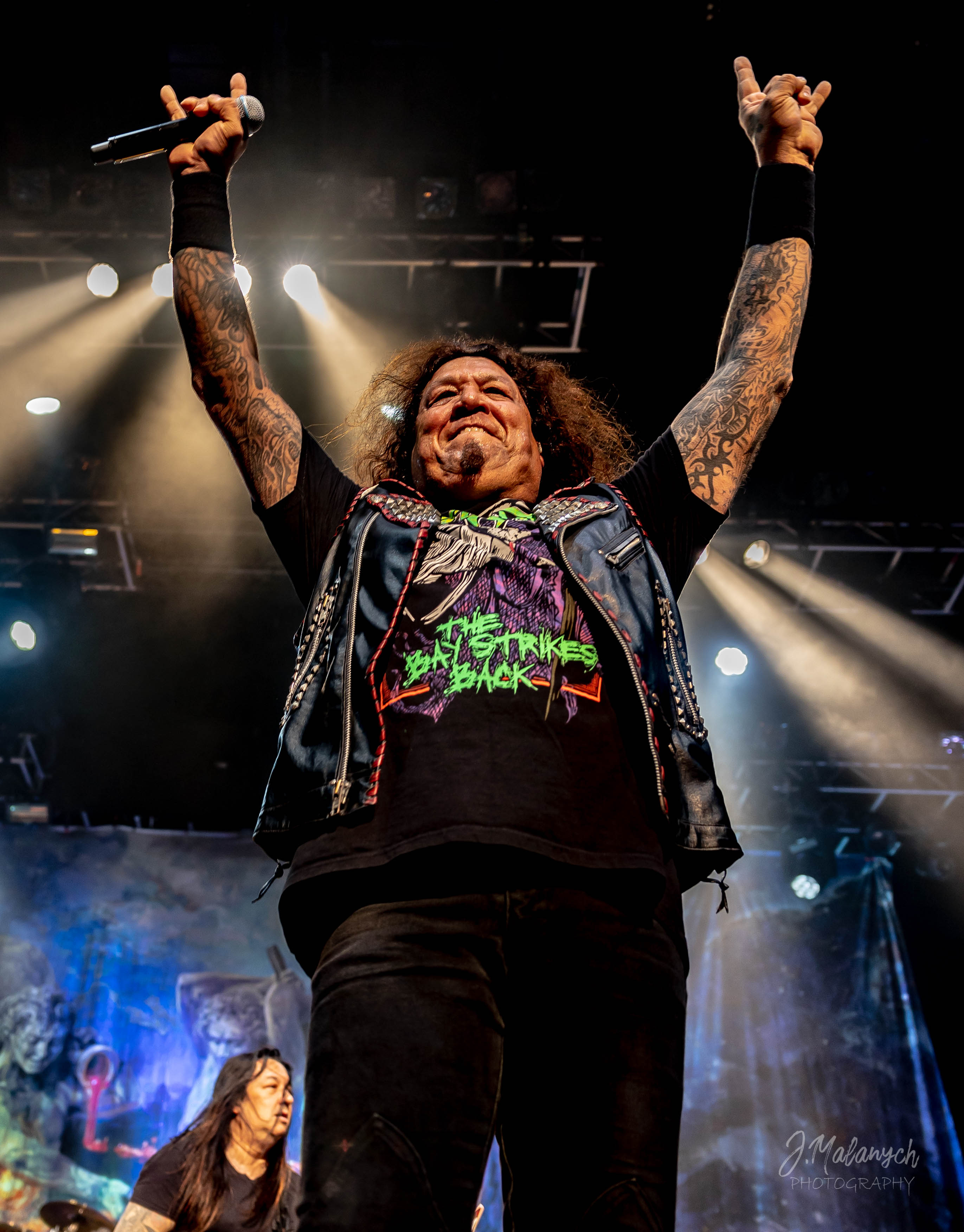 So once again I was approved to shoot the show tonight 2 hours before is started by none other than the man himself, Chuck Billy. I grabbed my gear and raced to the Hard Rock Live venue. As I walked from my car to the Hard Rock, I passed many older adults, gray, bald, long-haired sporting their favorite Testament, Exodus and Death Angel shirts. I wondered if the crowd was going to be made up of guys like myself reliving some of the greatest times, we had in the 80ties. I was pleasantly surprised when I arrived, and I watch the show unfold. It was as quiet as a library until DEATH ANGEL reached the stage and started ripped through their first song.

The pre-show quite was interesting, and it happened prior to each band making their way to the stage. Maybe it’s the adults in the crowd silently in reverence to the bands that defined our youth. The message from all the bands tonight was crystal clear. Orlando has always been one of their favorite towns to perform in and because of covid it had been in the words of Chuck Billy, “Too F#*king Long”. The production ran flawlessly at the Hard Rock. The backdrops of old with basic lettering and band logos has been upgraded to amazing works of art. The stage lighting which is always a challenge was well orchestrated. I hate to say it but it was a beautiful metal show. EXODUS made their way to the stage next. Although crowd surfing had started at the onset with DEATH ANGEL, it was starting to go full swing during EXODUS’ set. The bands were playing their hits and different songs off their newest albums, many of which because of the pandemic were never performed live. Tonight was a game changer for all in attendance. Every band was bringing something old, something new, and something brutal. I am not going to bore you with every detail of what these bands do. It’s obvious, they wanted to make the crowd forget the last two years and embrace live music once again. EXODUS never missed a beat. During their set a wide mosh pit opened in the center of the crowd. Every band brought their own kind of chaos and security always top notch at the Hard Rock, bolstered their security forces to get ready for the onslaught of crowd surfers. During their set they did break into the intro to “Walk” by Pantera further cranking up the crowd. It’s an amazing feeling to be able to close your eyes and feel like you are suddenly transported back in time. EXODUS like there sister bands never stopped for a minute. They all gave 150% and the crowd could not get enough. At the end of the set a kid who appeared to be about 12 maybe older was reaching out to get a guitar pick from the guitarist. He had to climb over the barricade to reach. EXODUS pulled him on stage, slung a guitar over his shoulder and let him jam a bit on guitar. He was an instant crowd pleaser and everyone went crazy. I have a funny feeling that kid decided his future right then and there.

The headliners made their way to the stage next. TESTAMENT never let the momentum drop for a minute. They blew headfirst into their set and the crowd once again erupted. These guys are road dogs and I mean that term with the utmost respect. Chuck Billy is an imposing figure to say the least. Like the bands prior, these guys never stopped for a second. I have been to shows with bands half their age who could never keep up with these guys. It was like they brought all the energy they had bottled up for the last two years to the show. They played their hits, but they played their new music written prior to everything shutting down as well. Billy explained to the attentive crowd. They might not have been able to play live, but they never sat on their asses either. Instead of waiting around for concerts to start up they wrote an album for their fans to specifically hold them over.

TESTAMENT, EXODUS, and DEATH ANGEL, are icons of metal to say the least. I heard it over and over and over again last night, people saying I feel like it’s the 80ties again. For me and many of the fans we were transported back in time, when metal was pure, hard, driven and brutal. I thought again about when I walked to the venue from the parking lot. There were many older fans like myself also making their way there. I can assure you there were many very young fans who were crowd surfing, moshing and realizing the importance of these bands, and how they shaped the metal of today. I highly suggest you buy a ticket quickly if you are a metal fan. This tour has been selling out show after show after show. Time waits for no man, but these bands, the music they play, and what they represent, are ageless. It’s bands like this that legacy’s are built on!